Robots are the future of logistics

They don't gossip over coffee, they don't go out for a smoke together, they never meet, yet they form a close-knit team. They can work 24 hours a day, 7 days a week, yet their engagement and motivation never wane. We are talking about robots naturally. Raben Group already “employs” 18 of them, but it is just the beginning. There are so many benefits to using Robotic Process Automation that the company has much more ambitious and far-reaching plans in this area.

Robotic Process Automation (RPA) in logistics is actually already a necessity given the nature of many tasks and processes in this sector combined with the labour shortage. However, if your idea of “robots in logistics” are humanoid machines working in a warehouse and effortlessly taking pallets off the highest shelves, you may be a little disappointed. It's true that with the development of robotization and automation in logistics, Raben Group is implementing various solutions to increase the efficiency of warehousing and transport processes, e.g. shipment measuring devices, autonomous or semi-automated forklifts, “cobotic” arms, the Internet of Things (IoT) sensors or automatic sorters. However, over the past two years, the Group has been equally engaged in process robotization and focused on RPA, the so-called software bots that mimic user actions in IT systems. Currently, their team has 18 units that perform more than 60 processes. The robots are unattended, i.e. they are centrally controlled robots that do not require interaction with users and de facto fully assume their roles. In a sense, there is a human element in them: they have virtual work environments, as if they had their own computers, their own identities, accounts, and passwords assigned to them. Consequently, as members of the international Raben family, they have been given names specific to the region in which they work. And so, Jürgen updates the German network, Bolek develops the linehaul routes, and Robertas takes care of the route closures.

Unattended robots are high-tech, virtually autonomous entities that operate in IT systems. Naturally, they require task scheduling and supervision but beyond that, they also work when the physical user has already left for home. 18 robotic licenses that we can use 24 hours a day, 7 days a week, effectively means at least 50 full-time jobs. In addition, the RPA robot is able to do the job several times faster than the user, which is a huge improvement, especially with the current problems of employee availability in logistics. If we additionally consider the flexibility, efficiency, reliability and attractive costs of RPA, there is no doubt that automation will be the future of our industry.

Development of the RPA technology in the structures of the logistics operator can be credited to this very unit. In September 2021, a dedicated team was spun off from Genius Lab, Raben Group's department dedicated to the widely understood innovation and logistics of tomorrow, but the company was interested in RPA much earlier. In 2019, as part of the exploratory and R&D activities, the first robotic processes were developed while simultaneously exploring the features and capabilities of several commercially available RPA platforms, and once a single solution provider was selected, process implementations began. Currently, the four-person team acts as a typical Centre of Excellence: it is here that the ideas for improvements and process automation are submitted, the feasibility and profitability of the project is analysed together with their authors, and if the assessment is positive, the implementation and process configuration phase follow, first in the test version, and then in the production version. On a daily basis, experts analyse RPA's potential from a logistics perspective, design robotic processes, and plan and control bot operations.

For the needs of RPA, in 2020 the team built its own process management platform called myRobot, which works with bots on multiple levels. It allows users to control their work directly and run a certain group of robotic processes on demand, based on inputs imported into the platform. In addition, analytical dashboards have been correlated with most of the robotic processes, providing valuable feedback, such as when hourly peaks occur, how many routes have been closed and how many are still waiting to be processed, how many tasks and with what result the robot has performed in a given period (robotic error-free level), how much time has been saved, and to what extent individual licenses have been used. This in turn contributes to RPA optimization and helps maximize license utilization around the clock.

These 18 robotic units are “employed” in most of the company's areas of business activity. They support planning, loading and unloading operations, as well as billing, quoting and invoicing. They close routes, change statuses, and prepare route length calculations. The use of RPA in logistics is a relatively fresh trend, but it perfectly meets the unchanging business expectations and priorities of operators over the years, i.e. maintaining profitability, engagement or mitigating risk. Nowadays, it is possible to plan the work in such a way that if everything runs smoothly, the robot itself goes through the whole process of handling the order: it assigns statuses, confirms that everything is okay on the route, sends a signal to mobile devices, to the driver, and after collecting ETA information also to customers, etc. Thanks to such use of RPA in logistic processes, human decision is required only in critical situations (e.g. delay, accident, theft), which happens really seldom.

Automation of office processes allows the company to develop faster, increase the number of handled operations with the same level of employment. It is a simple and cost-effective way to optimize current processes, but also to create a reserve “capacity” for the future, in case of increasing the scale of operations.

RPA is also ideal as a system load testing tool. Instead of ordering users to carry out various tests: regression, change and load tests, you can delegate robots to do this work, which will, for instance, process the maximum number of shipments in an hour, which will allow you to assess the performance of the system. This is yet another proof of the versatile application of robots in logistics, and for Raben Group another argument to invest in this area. The company plans to at least double the number of robotic licenses within two years, and its IT infrastructure is ready for it today.

The robots are able to fill dozens of jobs in Raben Group, which is invaluable in the situation of staff shortages. Their operations should be considered not only in quantitative but also in qualitative terms: they perform human work on average four times faster, without error, according to an algorithm and without the need for changes in IT systems. This, of course, translates into very tangible, quantifiable savings for the company. For example, RPA-based implementation of the Lean process in Fresh Logistics generated savings of 60 hours, which is the amount of time an employee would have to spend on these activities. Using robotic units, 3.5 million routes were already closed from October 2019 to early 2022, freeing up time of more than 25 FTEs.

Robots allow for better use of the potential of employees because they are able to take over from them tedious, repetitive tasks, which are the cause of work fatigue and burnout. At the stage when the first robots emerged, some scepticism and distrust of the technology was evident among users. Today they appreciate them, acknowledging that they are a great help and free them from tedious duties. They can spend the time they save on more creative and rewarding work. It should be also noted in this place that the human factor in the company is still in some respects irreplaceable and probably will not change soon. This includes the aforementioned critical or even crisis situations and any non-standard events. In such circumstances there will always be a need for a person with their competences and ability to make decisions, however Raben equips its employees with additional tools which support such processes.

Finally, it is worth mentioning that the described way of using RPA is only a means to an end, it is an element of a bigger undertaking in Raben Group structures which is aiming at hyper-automation. This concept describes a higher level of robotic operations involving greater use of artificial intelligence, machine learning techniques, engagement with other platforms and systems in addition to RPA, and integration of more components, such as information from different sources: robots, the Internet of Things sensors, CCTV cameras or GPS systems. Hyper-automation is the future that will create a new - and hugely automated - way of working in IT applications and systems, not just in the logistics sector. 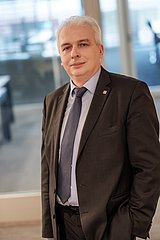 IT team manager for robotics and process automation